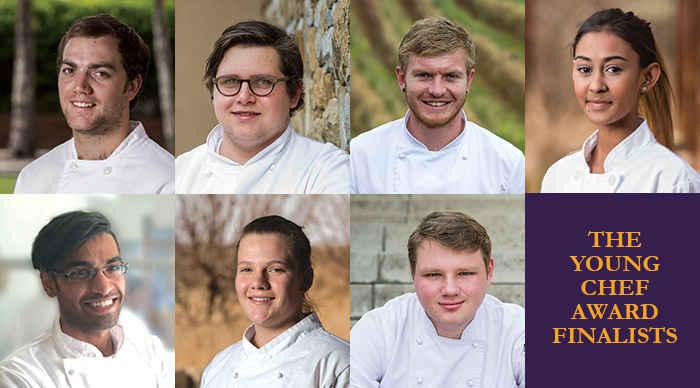 The battle of the canapés is over. The search for the second ‘Chefs who Share – Young Chef Award’ has now been narrowed down to seven.

The following promising young chefs’ creative canapé creations have earned them a place amongst the official seven finalists for ‘Chefs who Share – Young Chef Award’ 2016:

These seven young talents, chosen out of all entries from 77 of the country’s top restaurants who were invited to nominate their culinary talents between the ages of 18 and 29 years old, had to submit an outstanding canapé creation to win over an esteemed panel of industry professionals.

While the canapé creation is the ticket for being invited to experience the cooking at the event in Johannesburg, the criteria for becoming the winner are “soft” skills like team spirit, engagement, creativity and the overall personality. The winner will be announced at the evening of the Gala, after having been selected by Swiss International Air Lines Ambassador and Chef Reto Mathis and Lentswe Bhengu, Ambassador of ‘Chefs who Share – Young Chef Award’.
Says Bhengu, who was instrumental in initiating this Award last year, “I felt an Award like this is a necessity, because it has the potential to change the lives of promising young chefs through their passion – cooking.”

He continues, “The Award is a great opportunity for every young chef who wants to make a name for him- or herself in the industry. The aim of the Young Chef Award is to find talented young people, give them opportunities to shine, and inspire them in terms of their development as a Chef.”

Bhengu’s fellow judge, Chef Jason Whitehead, continues, “The criteria for selecting the top seven Young Chef finalists are creativity, uniqueness, taste, and visual impression of a canapé the contestants need to create. Serving these creations to the high profile guests of the gala is a nerve wrecking, but unforgettable experience for these youngsters”.

As the first ever ‘Chefs who Share – Young Chef Award’ winner, Jamie-Lee Saunders won last year a European culinary experience. As part of this, she worked in the kitchen of Michelin-star restaurant Storstad in Regensburg, visited Paris and experienced the Maisons of Veuve Clicquot in Reims, and Moët & Chandon in Épernay.
Saunders, who convinced the judges with her creative pink peppercorn macaron filled with a duck liver paté and candied apples, says, “This culinary experience was undoubtedly an adventure of a lifetime. I loved every moment. I will never forget this. I will forever be grateful and I know it will influence my career – or better, it has influenced my career already.”

One of this year’s finalists, Blaine Robert Coetzer, Senior Chef de Partie at Leeu Estate, earned his place as a finalist with a salmon-creation entitled ‘When the ocean meets the earth.’ Coetzer, who grew up in the farm areas of the Midlands of Kwazulu-Natal, says he answered his restaurant’s call-to-entry for a chance to change his life.“Winning the Award would open so many doors for me. I have always just been in the background. This award could change that. It might be a dream, come true.”

The ‘Chefs who Share – Young Chef Award’ 2016 winner will receive substantial local recognition, and will be flown to Europe by associate airline sponsor SWISS to work in a Michelin-star restaurant, and to visit the headquarters of Moët & Chandon in Épernay, France, to experience the culinary and oenological highlights of Champagne.

Arguably, all seven finalists are winners, as they get to work alongside kitchen heroes like Margot Janse, Marthinus Ferreira, Chris Erasmus and Dirk Gieselmann, to name only a few out of the twelve, for two days.

The South African top chefs are joined by some international colleagues, including Michelin-starred Vineet Bhatia coming from London and Vincent Rodier from LUX* Resort & Hotels in Mauritius and, for a second time, Chef Reto Mathis from Switzerland.

The gala, during which extra-ordinary pieces of art are sold during a live auction, is the finale of a series of feel-good events held from 19 -24 September, this year for the first time in Johannesburg. To date, the series of events have raised R6,1 million in aid of youth development in South Africa.