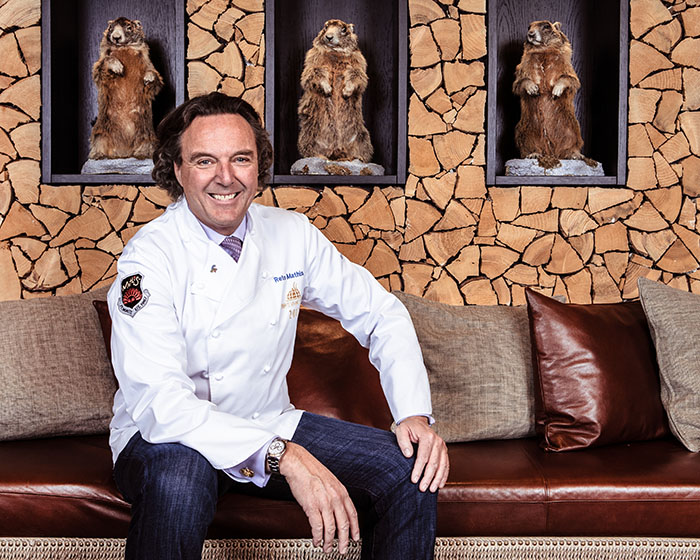 World-renowned Swiss chef Reto Mathis will be coming to Johannesburg in September as part of the Chefs who Share – the ART of Giving project in partnership with Swiss International Air Lines (SWISS). Chef Mathis will be preparing a one-night-only dinner at the Saxon Hotel in Sandton on 22 September 2016, with executive chef of the Saxon, Mr Werner Snoek. A percentage of proceeds raised from the dinner will be going to the Chefs who Share project charities and the Veggie Box initiative.

Chef Mathis owns and manages his popular gourmet restaurant La Marmite, which is located 8000 feet above sea level on the slopes of St Moritz in the Swiss Alps – the highest gourmet restaurant in Europe. In addition, Mathis is a regular partner with Swiss International Air Lines having been part of the “SWISS Taste of Switzerland” initiative, which involved preparing specially crafted in-flight culinary menus for the first and business classes on SWISS flights, as well as being a regular consultant to SWISS on the creation on in-flight menus. SWISS will be supporting the Chefs who Share project by providing the transportation services for Chef Reto Mathis and a number of other international chefs taking part in the project.

“I am honoured to be, for the second time, part of an initiative which gives back to local communities,” says Chef Mathis, “Chefs who Share is a creative way of sharing knowledge and expertise with all participating chefs and sommeliers and involving children in a manner that impacts their daily lives and health positively and sustainably.”

Danica Helfrich, Head of SWISS South Africa says that it is a wonderful honour to be able to bring Chef Mathis to South Africa to be one of the international chefs to be part of Chefs who Share. “Chef Mathis is very well known, not only in Switzerland but throughout culinary circles worldwide. His exceptional abilities, especially regarding uniquely amalgamation of Swiss classic dishes, versed together with refined products such as truffles and caviar, make him and his restaurant a firm favourite. Further, he is very well accustomed to preparing exceptional dishes at high altitudes for the discerning customer, which makes him a perfect partner for SWISS.”

Chefs who Share founder Barbara Lenhard states that having SWISS as a partner is wonderfully appropriate. “SWISS is known for its incredibly high standards and luxury and lifestyle service offering. The quality of the food that they offer on board is of great importance, and the airline is often considered one of the best in the world when it comes to in-flight dining.”

Tickets for Chef Mathis’s Chefs who Share dinner, to be hosted on 22 September 2016 at the Saxon Hotel in Sandton, will go on sale shortly, and will be available via email on tickets@chefswhoshare.com

Concludes Helfrich, “The Chefs who Share project not only allows for SWISS to facilitate the exploration of Swiss cuisine, but also assists in us giving back to the communities in which we operate.”